Skip to content
You are here
Home > Ubuntu > Xubuntu 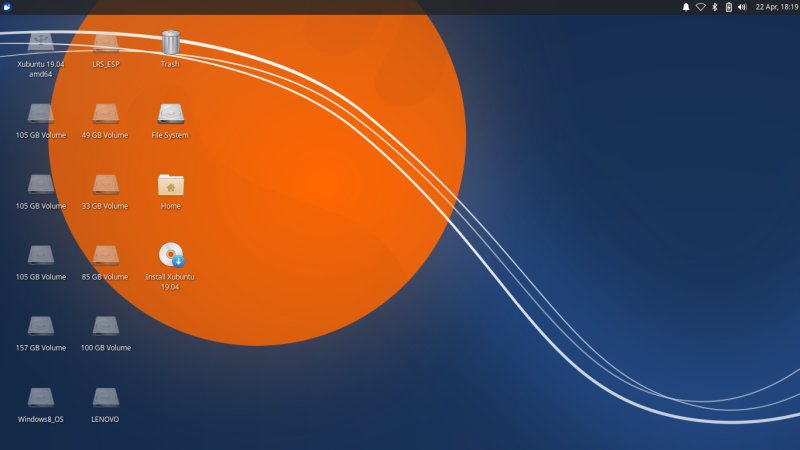 A review written by https://www.dedoimedo.com

In the spring, the snow thaws, the animals come out of hibernation, and the hunting season begins. The season of distro hunting! Fooled you there for a second, didn’t I? Also, this is not true in Australia, which is on the side of the planet, and there it ain’t no spring, it’s autumn (or fall if you like). Why? Because Dingo. Hence Xubuntu.

We shall commence the spring crop review with the Xfce-flavored one of the bunch, with testing being done on me Lenovo G50 scapegoat machine, with its eight-boot configuration, Windows and Linux mixed. My impression of Xubuntu Cosmic was okayish, but nothing too remarkable. The sweet momentum of yore seemed to have wandered away elsewhere, like MX Linux. But there’s always fresh hope. So it’s download and test. We begin.

No trouble booting. I did see one naughty text line, but other than that, it was an unremarkably quiet start. Xubuntu 19.04 comes with a familiar Xfce layout, including the plethora of disk volumes, in this case a whole lot of internal partitions, which simply looks messy and unnecessary. The wallpaper also means nothing, because it does not signify either the release animal or anything Xubuntu specific. The fonts are ok, the menu is all whiskery, but it’s not invoked with the Super key.

Wireless worked fine. Bluetooth, well, it was a bit odd. The pairing didn’t work when I tried to run the wizard, but when I initiating the pairing on the phone, it did work. I wasn’t able to browse the phone, though, and the actual device management interface is so 2005.

There’s no Samba configuration, at all – the tiny samba-common package isn’t installed, so you won’t enjoy much diversity when it comes to operating systems file sharing. Annoying. I grabbed the package, and then also added my own tweak to undo the overzealous security and allow for normal file sharing. After that, Samba worked fine, and fairly fast, too. Printing, good, no complaints.

No issues. Both MP3 playback and HD video worked fine. There’s no fancy system area notification thingie, if you’re looking for one, and closing the program also means your music stops right away. But other than that, you get what you want and expect.

Again, no problems. It did take a bit of time for the Aquaris phone (Android) to show up in the file manager. The rest of the bunch behaved well – Windows Phone as well as iPhone. I don’t like the fact the phone serial numbers are shown in the address line. This is unnecessary information, and a simple naming convention would be far more desirable.

The touchpad was mighty jittery, and I had to disable taps to be able to use the laptop properly. Thunar wouldn’t let me drag & drop locations into the sidebar in order to bookmark them. This might be a one-time live session bug. We shall see. I also noticed Xubuntu Disco supports APTURL, so this means you can install software right from the web pages, somewhat like the 1-click openSUSE installers.

This was a fairly standard affair. Predictable and also somewhat annoying. There was the 15-minute partition scan, which is just a waste of time. Then, you can choose whatever keyboard language you like, the locale will be localized to your timezone choice. A new and interesting feature is the ability to install graphics drivers while setting the system up, so you have them from the first login, somewhat like what we saw with Antergos some time ago. The slideshow is rather bland and uninspiring – and smaller than the actual install wizard window, which also makes my OCD glands tingle.

Who let the dogs (marsupials) out

The installation worked without issues, although it was long – partition discovery plus GRUB setup. After the reboot, the boot sequence was clean, and I had Wireless right away. This is good, because it ain’t a given anymore, but we shall examine the consistency as we progress with the other distros.

I had the update prompt right away, so this is good. The software center feels and looks Gnome 3, and it comes with its own window borders, different from the rest of the system. Works fine, but it’s not really pleasing or exciting in any way.

I noticed the software sources management tool has been visually redesigned a little, and this is a nice touch. There was also an option to use pre-released updates. There were no additional drivers for the system, so not sure what happened to Intel firmware (none since Meltdown and Spectre more or less).

Livepatch is another cool feature, but you can’t just use it. You need Gnome Online Accounts, aha! I did install this package, and then I learned that Livepatch is only available for the LTS releases and not the interim ones. Kind of makes sense. But I still wasted time trying to handle the dependency for something that’s not necessary or possible in the system.

At 1.5GB image, Disco comes with a rather reasonable if a little slim collection of software by default. Firefox, Thunderbird, LibreOffice, Parole, Transmission. Not too much else, but it’s all right. You can easily replenish the missing bits.

Pretty solid. Xfce ain’t no slouch, and you get a sprightly, fast session. On idle, the CPU ticks close to zero, and memory usage is about 550 MB. This is quite all right. Most importantly, windows open and close instantly, the software responds quickly, and you even get really nice transition effects.

It was okay, but can be better. While all the different Fn buttons worked, wake from suspend was slow. It took about 10 seconds, and I had a black screen that read: this session is locked, you will be redirected in a few seconds something, what! After that, I did get back to the desktop, and I had a prompt to provide an admin password for repo refresh. Four times. I didn’t type the password wrong, so no idea what went there.

Not good, I’m afraid. While testing, I had about 72% charge for a battery that has about 65% original capacity. This means about 47% of what the cell could hold when new. And with 100 minutes at 50% brightness and light usage, this translates into only about 200 minutes theoretical usage time, or about 3.5 hours, much less than what I’d expect. MX Linux and some Plasma systems offered 4.5+ hours quite often.

This was a necessity – and a frustrating one at that. I wanted to use a dock, so I could have icons + open windows under the same button. Typically, in Xfce, I’d configure two panels, top one with text-less windows list, and a second panel at the bottom, used as a launcher for application. But to make it more elegant, I tried using a dock – we talked about this in the past, how to make Xfce dope and whatnot.

But this didn’t work well. Plank would crash every time I tried to drag ‘n’ drop an icon – there’s a bug from about four years ago, but hey, we know fixing problems isn’t as cool as writing new software all the time. Docky isn’t in the repos anymore, and I couldn’t find any other elegant or practical dock-like utilities. I had to use the second panel arrangement after all. I did add two transparent separators on both sides and had them expanded in order to have a centered layout of shortcuts for a full-width panel. All this felt rather unnecessary, especially when I compare to how Plasma does it.

(plank:11447): Gdk-ERROR **: 15:48:45.815: The program ‘plank’ received an X Window System error.
This probably reflects a bug in the program.
The error was ‘BadValue (integer parameter out of range for operation)’.
(Details: serial 4978 error_code 2 request_code 26 (core protocol) minor_code 0)
(Note to programmers: normally, X errors are reported asynchronously;
that is, you will receive the error a while after causing it.
To debug your program, run it with the GDK_SYNCHRONIZE environment
variable to change this behavior. You can then get a meaningful
backtrace from your debugger if you break on the gdk_x_error() function.)
Trace/breakpoint trap (core dumped)

The wallpaper only makes sense.

Eventually, I also sorted Thunar. I was able to drag folders from one level up, i.e. like files. You can’t drag ‘n’ drop from the address bar, the way it was possible once upon a time. A small thing, but it can be annoying if you’re trying to do things smoothly. Then, you get different icons for different folders in the top panel, which is cool. But then, the file manager only gives you thumbnail previews for image files, but not for music.

You get very nice notifications. I didn’t like the VLC icon in the system area, it just doesn’t sit well, but at least you have the option to hide it. Not sure if this was possible in previous Xfce releases, but it’s sure a nice thing, as it can calm the twitchy OCD demons.

And finally, because DINGO, I had to change the wallpaper to suit the ambiance du systeme:

Xubuntu 19.04 Disco Dingo is a fairly decent release for the bi-annual non-LTS testbed. It’s stable enough, sort of mature bordering on boring, fast when it needs to be, pretty when you make it, and gives a relatively rounded overall experience. But then, it also falls short in quite a few areas.

These look more like nuggets of apathy than deliberate omissions – networking woes with Samba and Bluetooth, customization struggle, less than adequate battery life, some odd niggles here and there. It just feels like a tickbox exercise rather than a beautiful fruit of labor, passion and fun. It is somewhat better than Cosmic, but it’s nowhere near as exciting as Xfce (or rather Xubuntu) used to be three years back. 7/10, and worth testing, but don’t crank your adrenaline pump too high.

P.S. If you’re in Australia and having trouble reading this review, please flip your monitor upside down.